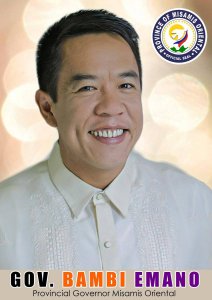 To serve is the core value of the young scion of the Emano family, GOV. YEVGENY VINCENTE “Bambi” BEJA EMANO. Bambi was molded into a life of service as he grew up observing his father, former City Mayor VICENTE “Dongkoy” YAP EMANO, former governor of Misamis Oriental and mayor of Tagoloan. As a young boy growing up in Tagoloan and Cagayan de Oro City, he observed first hand how politician should be—to be of service to others, especially the poor and the needy.
After his graduation from Xavier University/ Ateneo de Cagayan of Bachelor of Science in Agriculture, then 23, became the youngest person to ever hold a mayoralty post in the province and in the country. Due to his unceasing service, even to the point of sacrificing his personal interests, he was elected for 3 consecutive terms from 1998 – 2007. In his last term, he was elected bby at least 90% of the electorate.

Bambi was also looked upon by the other mayors of Misamis Oriental as a leader. He was elected as President of the League of Municipalities of the Philippines – Misamis Oriental Chapter during his last term in service as Municipal Mayor of Tagoloan, Misamis Oriental.
In 2007, he ran as Representative of the Second District of Misamis Orientral and won by a landslide over three other candidates. barely 6 months into his term, he instituted Consultative Meetings with Barangay Captains as well as Municipal Officials in every Municipality. Gov. Bambi Emano’s raison d’etre when he was a representatitve for the 2nd District of Misamis Oriental was mainly pushing BARANGAY EMPOWERMENT. For this reason, his doucs in his first few months as a congressman was to push bills that are needed by his constituents.
While doing that, Gov. Emano also took part in the passage of key legislations as well as actively participated in committee hearings where he was a member during his 2 terms in the House of Representatives, from 2007 – 2013.
Gov. Bambi Emano’s quest for peace and progress in the Second District during his Congressional term was guided by his five-point agenda; LAMBO Misamis Oriental. L – impyo (for health, sanitation and environmental concerns), A – ntigo (referred to educational projects s uch as scholarship programs, and educational assistance and the likes), M – abungahon (referred to infrastructure projects, B – ahandianon (for livelihood projects and the likes), O – organisado (referred to getting hand-in-hand coordination of various organizations such as NGO, PGO and the likess in order to establish a broad and wide array of working relation in order to achieve planned goals and projects not only for the 2nd District of Misamis Oriental but for tjhe entire province as well.