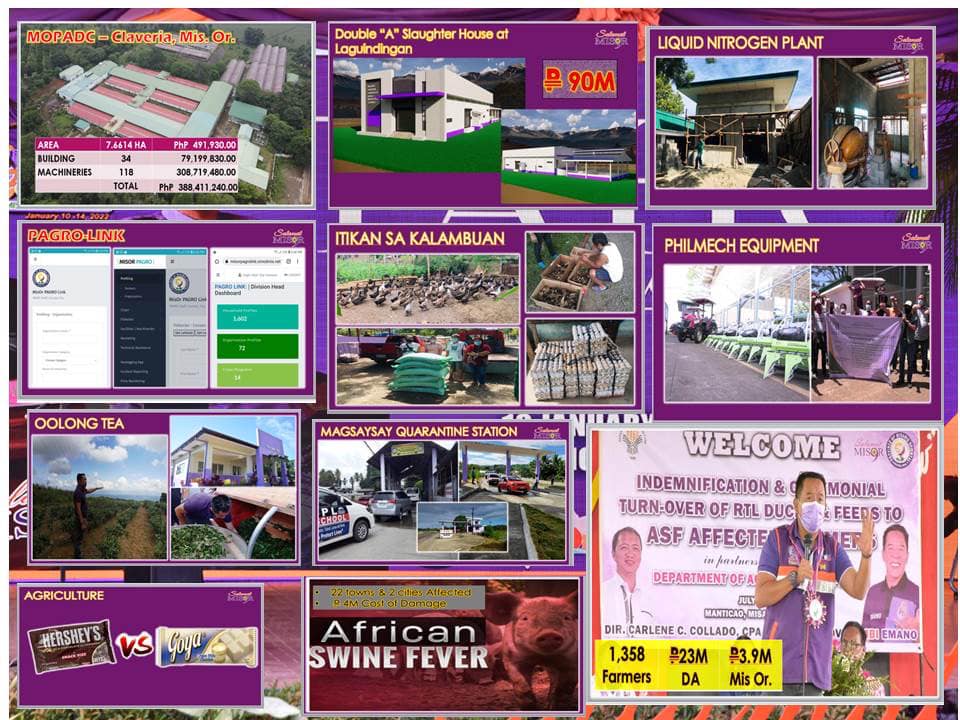 AT least 30,000 farmers have benefited and continue to benefit the agriculture development efforts in Misamis Oriental under Governor Bambi Emano’s administration for the last nine years.

Provincial Agriculturist Apollo Pacamalan said around 17,000 hectares of land are tilled by farmers to produce crops and coconut with financial subsidies,

technical support and marketing strategies provided by the Provincial Government in a bid to achieve the long-dreamed food sufficiency in the province.

“Mr. Apollo Pacamalan can validate 30,000 of farmers we were able to help in the last nine years and 17,000 hectares we were able to develop. We even help to expand the Oolong tea plantations. PAGRO will find a buyer for your produce so that middle man will not be able to take advantage of you,”

In the SOPA, Governor Emano expressed gratitude to PHILMECH for the partnership in the mechanization of farmers.

The Governor was happy to announce the creation of the Misamis Oriental Provincial Agriculture and Development Complex (MOPADC) in Brgy. Ani-e, Claveria, which he said would be the greatest asset for Misamis Oriental that he would be leaving even if he’s not anymore Governor.

MOPADC, formerly Philip Morris plant in Misamis Oriental, is donated to the Provincial Government for the redevelopment of the area intended for research and products development.

Governor Emano made special mention to Philip Morris for the generosity and trust.

To protect the livestock industry in the province, Governor Emano also announced the establishment of a quarantine facility in the municipality of Magsaysay and Liquid Nitrogen plant built in the Provincial Farmhouse inside the Capitol compound in Cagayan de Oro.

Dr. Resma said hogs products is a 2-billion-peso industry that needs to be protected from all kinds of diseases such as flu.

The Provincial Veterinary Office recorded 22 towns and two cities affected by the killer virus causing close to P40 million worth of damages to the backyard farmers.

Governor Emano also thanked the Department of Agriculture-RFO-10 for the partnership to quickly respond to the crisis and immediately mobilized P23 million cash assistance in addition to the Provincial Government’s P3.5 million for the indemnification of hogs culled and as start-up capital for them to start over again.

“Good that we developed the ‘Itikan sa Kalamboan’ years earlier before ASF came to the province as it become the alternative source of income to affected farmers,” Governor Emano said and sighed relief over worries how to feed the displaced backyard hog raisers who now earned around P23 million from the duck-laid eggs.

This has prompted Governor Emano to promote the massive planting of cacao in Misamis Oriental even as he ordered the Provincial Agriculture Office to expand the support programs to cacao farmers.