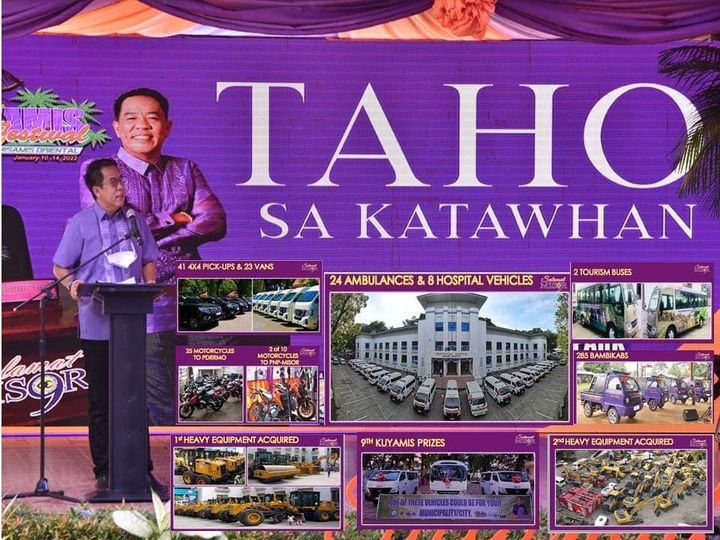 A total of 400 government service vehicles were purchased by the Provincial Government of Misamis Oriental under Governor Bambi Emano’s administration since 2013, a remarkable accomplishment as compared to previous leaderships 20 years back.

In 2007 elections, Governor Emano was on a political campaign in Barangay Nangcaon in Opol, Misamis Oriental, as candidate for Congressman in the province’s second Congressional district. He related meeting with Nangcaon Barangay chairperson Editha Ompoc who told him a story about a boy inside the public market who lost his mother and supposed sibling to motorcycle accident in the area.

Nangcaon is a far-flung village in Opol previously deprived of road improvements.

Ompoc related when the boy’s mother, who was pregnant, was about to deliver the baby. Also suffering from lack of attention from the previous administration of their transportation needs, the pregnant mother was forced to ride a motorcycle called Habal-Habal to the nearest hospital. On the stiff road, the front wheel of the motorcycle bumped onto a stone that caused the accident. The mother’s head hit a stone and immediately died. Apparently, the baby inside also died.

Since then, when he heard that story, right after he won the elections, then Congressman Bambi Emano started to distribute emergency vehicles called Bambi-Kabs. When he became Governor in 2013, Emano continues to dispense Bambi-Kabs until today.

“Kapitan Ompoc told me the story. I did not promise her but I promised myself that if given opportunity, I will try to purchase vehicles for all the barangays in my province para wala nay lain nga pareha ni Editha Ompoc nga isulti nga iyang inahan nga namatyan tungod kay walay masakyan panahon sa emerhensiya,” Governor Emano said.